It's warming up now--in the nineties occasionally.  Yesterday, it was cooler and stormy, with a tornado warning.  One tornado did tough down to the south of here, but did no damage.  We had some pea-sized hail and a lot of wind, plus .15 inch of rain.  Then things cleared and all was well.

We have been out to the cabin several times this year.  Last trip, we found hera buck moth caterpillars.  I brought a few back to see if I can get them to pupate.  I put them in a jar and they formed a caterpillar "train"!  They are now in a more natural setting in a screen enclosure outside and a plastic box inside. 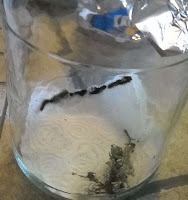 On the way back from the cabin, we saw this sign: 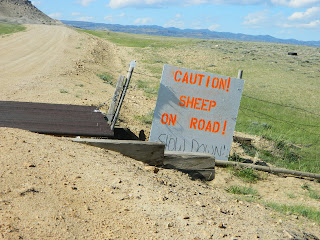 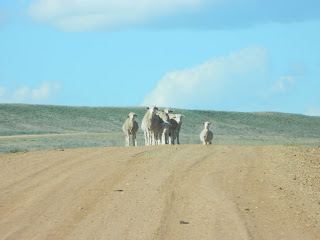 The last two trips out, we took pictures of wildflowers and critters.  We saw three badgers in one day (always a good day when you see badgers!), plus a fox, several eagles and a baby antelope on other trips. 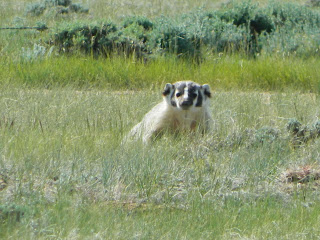 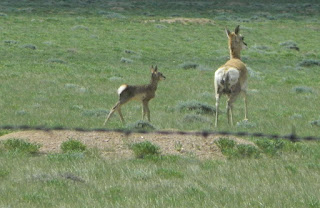 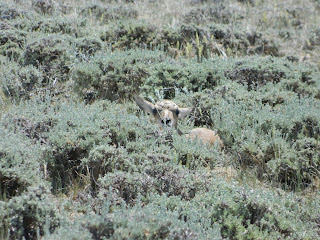 The pair of antelope were the first doe/fawn pair we had seen this year (June 9th).  The tiny fawn we saw June 16th.  He/she is only a few hours old.  The fawn did not move even though we drove past it twice, stopping to take pictures each time.  Very tiny antelope just lie very still in the sage brush.  I just happened to catch a glimpse of this one and we stopped for pictures.  Earlier, we slowed down when we spotted a fawn that looked fairly young, but it was old enough to get up and run when we slowed down.  They learn quite quickly to move away from danger--only the tiny ones lie still while you photograph them. 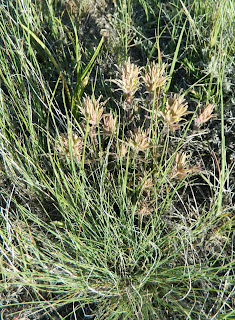 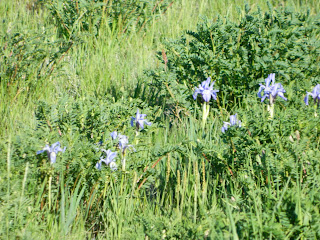 The photos above and below are paintbrush
we photographed on the way to the cabin.  This
type of paintbrush grows mostly in Shirley Basin.
It's greenish or purplish, unlike the more common
red paintbrush.  Indian paintbrush has many
species growing throughout Wyoming. 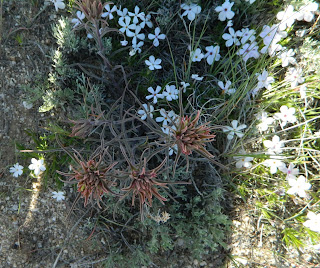 These are wild irises.


The ducks are now quite large.  They are allowed out of the pen during the day as long as someone is home.  It took a bit, but they are now wondering about the windbreak and garden areas most of the day.  These ducks are more docile than the Rouens than we had last year, though these are by far noisier.  They almost sound like geese when they get to quacking.  They know me and will stay lying down in the grass when I come by, but they don't know my hubby yet, so they still stand up and start quacking when he goes by.   It's interesting the difference between the two breeds of ducks.  The Pekins still lie down a lot and it wasn't until yesterday that I actually saw them "playing" in the water container we have for them to jump in.  Until yesterday, they would drink out of it, but not jump in.  The Rouens would immediately run to the pans when I turned them loose and jump right in.  The Pekins are much larger than the Rouens already.  We are watching to see how these work out before we decide what species to get next year. 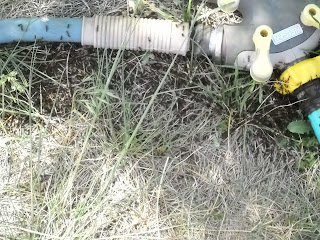 Ants were swarming the hose connection earlier in the week.  I don't know if they were looking for water or what.  It was a bit disconcerting! 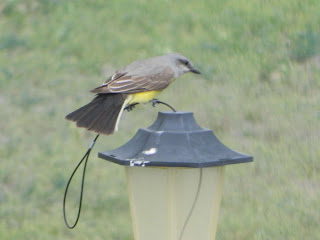 This is a kingbird atop the empty feeder.  A pair of these have built a next in the windbreak and like to dive at me and squawk when I go past the tree.  They hover above me and make as much noise as possible.  This is the first year I can remember them nesting in the trees, though I always see several of them in my yard each year.
Posted by TAC at 2:39 PM No comments: