The heat goes on!

My apologies for the title.  I just could not resist!  Things continue to be very warm.  It was over 90 degrees 25 days of July.  Worse yet, the rain just does not come.  We had .4 of an inch and that is it.  My garden is hanging on but just barely.

The good news is there's no grass to mow!  Nor is there grass to burn should another prairie fire start. 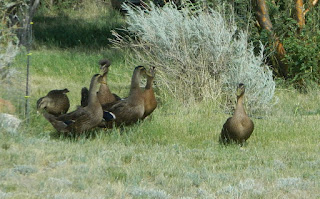 The ducks are doing their job and eating bugs everywhere, though mostly in the shaded windbreak.  They know where to be when it's hot.  I tried letting them in my little pond, but that was a mess, so they have a couple of small concrete mixing tubs they can play in.  They still have to stay in their pen if I am not home.  So far, nothing seems to be bothering them, but I made it this far, so I don't want something killing them now.  The covered pen has worked well.


Critters continue to come around in spite of the heat.  July 27 we had a baby sage grouse in our yard.  We saw it again the next day by the duck pen, but not since.  This morning, a doe, yearling and fawn were drinking out of our pond.  (The fence I used to keep out the ducks was too tall and the deer kept mashing it, so I folded it down for the deers.  The ducks can't get over it even at that short level. 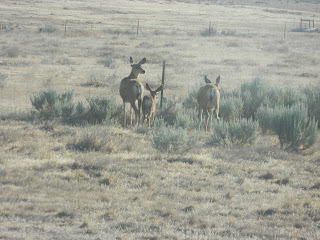 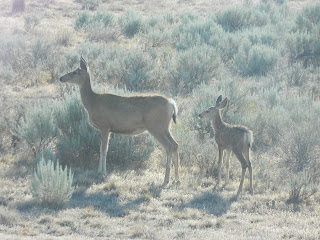 The most unusual visitor was a bull snake that crawled up the side of the house and was sitting on the A/C unit.  This was about 8:30 at night.  Half an hour later, we saw the snake again on the other A/C unit.  I have not had a bull snake climb up and peek in the window before! 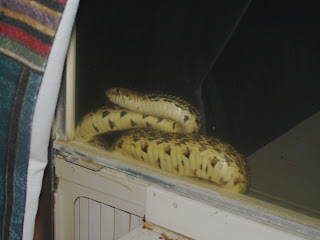 We are running three A/C units at various times to keep cool, when the swamp cooler does not keep it cool enough.  We have had trouble with the swamp cooler throwing water into the bedroom, white build up getting thrown everywhere and it not being able to cool that whole house.  Also, when the larger forest fires were burning, we used the A/C to minimize the smoke being pulled into the house.  This summer has been an expensive one for electricity.

It's been too hot for road trips.  We did drive over to see the old coal mine at Glenrock, which now is covered with those huge, white towers that honor Al Gore and his save the earth campaign.  I liked the mine better. 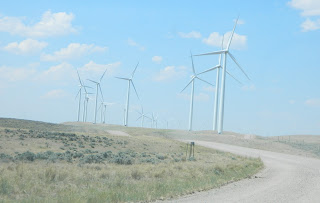 Oh--my lawn mower runs like a diesel engine!  I am waiting to see how it finally dies.  So far, in spite of mowing the windbreak's tall grass and a couple of rather rough areas in the yard, the thing continues to run.  I got rid of my old mowers and cultivators to reduce clutter around here.  Actually, I got rid of a carload of clutter twice so far this summer.  I am reclaiming my house, one box at a time!!