It's been a very long time since I updated this page.  We gave up on the livestock when we had only one duck left.  It was very lonely and I didn't see what good having one duck would do.  Also, the owner of the dog was taken to court and finally tied the dog up.  Hopefully, next year we will have better luck. 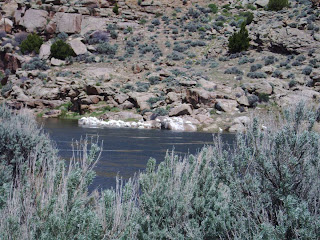 There was a lot of snow earlier in the year and we went out to take photos of Pathfinder Dam going over the spillway, as it did last year. 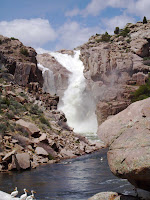 The pelicans were all over this year.  We saw huge groups every time we went out there.  They have little fear of people. 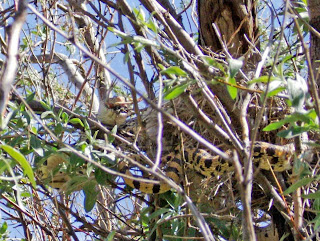 We had a bull snake that developed a taste for baby birds.  I had seen bull snakes on nature shows raid nests, but this is the first time I ever saw it in the real world!  This was the snake cleaning out a Loggerhead Shrike's nest.  The adult birds were VERY angry and squaked the whole time.  The snake ignored them most of the time. 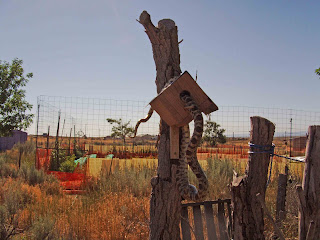 The bull snake later found an easier target--a bird house with sparrows.  I don't know if the babies had hatched yet and I suspect the snake ate both the female sparrow and the eggs/hatchlings.  The snake was not at all bothered by our watching this.  It was really interesting, unless you were sparrows.  I would note the sparrows did not put a fight and flew off when I started taking photos.  Hubby was home to see this nest clearing--he was at work when the first one happened. 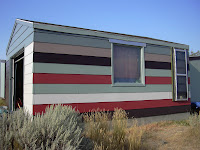 I painted the garage this year.  I made it stand out so our house would be easy to find.  Or that's the excuse I used!


We did well in hunting season.  The three deer living in our yard are no longer living there!  It won't take long for others to take their place, I'm sure!  We opted not to hunt antelope at the ranch, since we had meat left from last year and really didn't need any more.  We have to take the truck to the ranch to hunt and with gas over $3 a gallon, it did not seem worth it.

The Hut at the ranch is now insulated.  That should give us a longer period where we can go down and stay overnight.  Without insulation, the temperature could down to 40 degrees or less at night.  Even with a propane heater, it still was quite cold.  The walls are now pegboard on top and painted waverboard on the lower wall.  Plus, we also added another window for better ventilation. 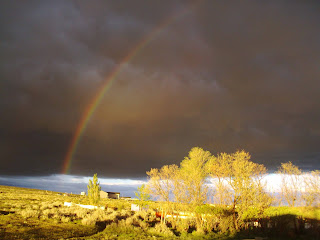 There have been some awesome rainbows this year!  It was wetter and warmer this year and we have had almost no snow.  The wind has been very strong this year, starting the first of November.  It even blew over the "Golden Arches" sign at one of our McDonald's!!
Posted by TAC at 12:22 PM No comments: