Winter was supposed to arrive as a "winter storm" over the weekend.  The storm was more of a light snow (under 6 inches) followed by a lot of wind.  There really is not much drifting as of yet, no need to break out the four-wheel drive. 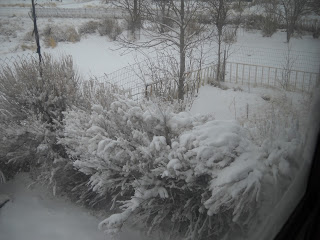 I will admit I am jealous of the East Coast.  I truly miss two feet of snow.  Cold would be nice, too.  The -40 weather that was here in 1983.  No, I am not a masochist.  I just love cold and snow.  It's one of the reasons I don't live in a warmer place, say Florida.  Perhaps we will once again get the snow next year.  Actually, some of our heaviest snows are in March and April.  The snow just does not last long due to the warmth.

Here's a picture of the frost on our window: 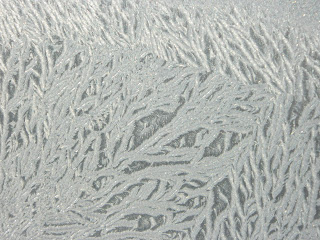 I think frost patterns are SO fascinating.  They look like trees and ferns, sometimes mountains.  Nature is really beautiful!

It's been quiet here, except for the occasional dust storm or haystack fire: 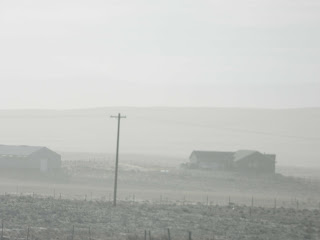 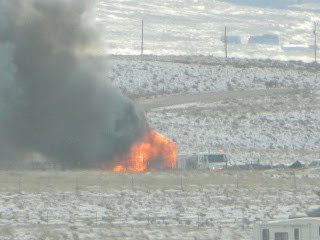 My Christmas cactus bloomed this year--actually two of them did!  It's been over 10 years since any of the four bloomed.  My guess is the location actually had the right temperature and light to induce blooms.  These are some of the prettiest flowering house plants.  The cactus is a cutting from a cactus my grandfather had some 70 or more years ago.  The plants don't do as well in Wyoming as they did in Iowa.  It's too dry here, even inside.  They seem to thrive in higher humidity areas.  I keep on growing them and hoping to figure out the magic combination for getting blooms and bigger plants. 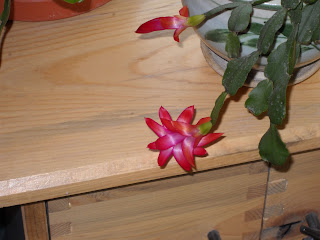 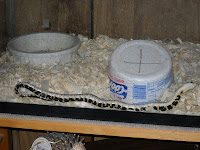 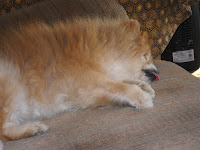 The picture under the cactus one is the hognose snake crawling along the side of his cage (my apologies to any persons disturbed by the photo--just scroll down!).

The picture on the left is my pommie playing dead dog.  She has a dental mismatch and her tongue hangs out at lot!  Makes for a very convincing dead dog photo, scary convincing at times.

The picture on the lower right is the gecko shedding his skin.
He has difficulty getting the skin on his head to slide off. 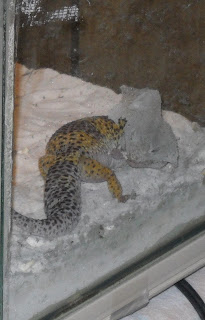