Cold and wet weather returned to Wyoming.  The ducks are now in the greenhouse where they stay dry and out of the high wind.  We had to snag the ducks out of their pen yesterday when the temperature dropped to around 45 and it continued to rain.  They don't have their adult feathers yet and they were soaked when we went out to check.  We herded them into a cage, then moved them over to the greenhouse (all the plants that were hardening off had to come in the house--this is a chaotic time of year).  I do have to check on them to be sure they don't get too warm.  I think they preferred the pen, though maybe they just don't like being chased into cages and relocated!

I noticed their beaks are different colors.  I looked this up and that is apparently how you determine the sex of the ducks.  The lighter peach colored beaks are the females.  We have two females and three males.  It really did not matter to us what sex they were since they are just bug-eaters.

It continues to be cold today (50 degrees) and the wind is 15 to 20 mph.  The rain is slowing, so they may be able to go back to their pen tomorrow or Wednesday.

(This will be after I modify the tarp over the pen.  It was nicely waterproof, but also collected a lot of rain, sagging down and damaging the chicken-wire cover to the cage.  Since it has been quite some time since we had any significant rainfall, I had not thought of this possibility.)
Posted by TAC at 1:57 PM No comments: 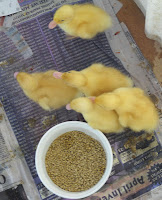 Our baby ducks arrived April 26th.  You see they were very small when we brought them home.  These are Pekin ducks.  Last year we had Rouens.  We raise the ducks to serve as bug and weed control, then butcher them in the fall.  Last year, the Rouens had started laying eggs and we did not know this until this spring when we cleaned out the duck house.  This year we will watch more closely.

These ducks grew very quickly.  We had them in the garage in the duel sided pen from last year (see June 19, 2012 on this blog).  However, because they grew quickly, we put them outside at three weeks of age.
Everything I have read says ducks have to stay warm, but ours have always been kept at 60 to 70 degrees since day one.  Moving them outside actually was warmer than the garage pen.  The cold has no effect on them.  However, when the mercury hit 88 degrees one day, they were panting significantly.  I sprayed the tarp on their cage down and wet the ground to help cool them.  Mornings when it's 45 degrees they are out peeping roaming around the pen. 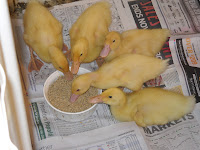 This is at about a week in age.  They more than doubled in size during this period.  They were getting cramped in the three foot by three foot pen, even at this age.  And MESSY.


To the bottom right, this is one of their first days out. 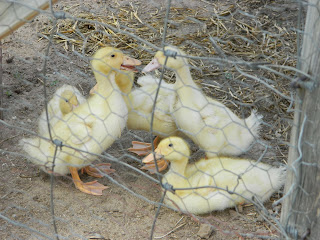 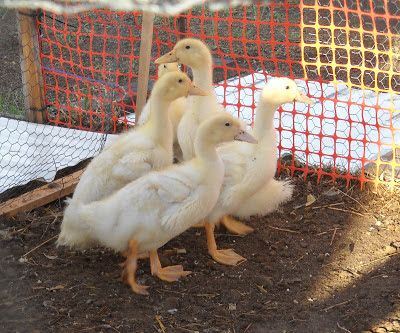 Below:
You can just see their wings starting to feather out.  They look so funny with the tiny little wings--almost like arms!  They are also getting more white with each passing day.  Unlike the ducks last year, these are not as friendly.  They will come over when I talk to them, but only cautiously.  They also lay down a lot, especially when they seem frightened. 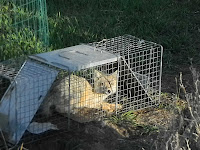 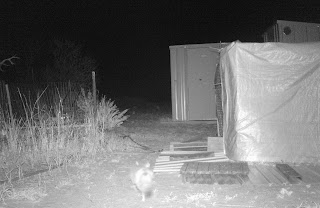 Here we have one of the many swift foxes that live around our lot.  The trapped one was relocated several miles away.  The ducks are still very small and vulnerable to an attack.  I think by the time they get feathered out, the fox may not be such a threat.  Swift foxes are very small-about the size of a cat, and not nearly as aggressive as red or gray foxes.

My game cam caught another fox cruising about after dark.  So far, this has been the only one. 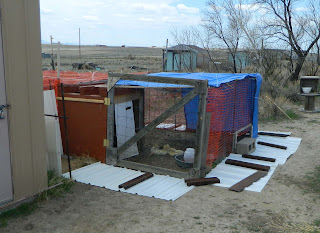 The pen this year has a full cover--chicken wire on one side, orange snow fence on the other--to help keep predators out.  After catching three foxes so far this spring, we opted to add fiberglass around the pen for now, so predators can't dig under.  I will probably modify this design as the ducks get older.  You can see a "door" right by the concrete block.  This is so we can reach the food and water containers without going into the pen or opening the larger gate.  I decided last year we needed a change.  Also, the water dishes will sit on an area I dug out and filled with rocks, then put the dirt back.  This should allow for much better drainage.

I will update periodically.
Posted by TAC at 3:37 PM No comments: