It's summer, now it's winter!

Life has been interesting here. We added on to our cabin so we have a separate bedroom. Picking up the bed and putting it away each day was quite time-consuming and crowded. Now the bed can stay up. It's also elevated—we're getting too old for sleeping on the floor! Dusty likes it because there's enough room she doesn't have to hide in her crate to avoid getting stepped on!

On our trip to the ranch on Labor Day, we decided to go out through Medicine Bow, then up the Fetterman Road (which is marked as a county road but has no winter maintenance. The photos show how winding and narrow it is. We drove through the fire area. This fire burned in a mosaic pattern—large areas untouched, other areas completely black. It was a surprise to me. I had only seen fires that burned everything like the Coal Mountain fire and the Casper Mountain fire six years ago.


Speaking of Casper mountain, Sunday (9/9) the mountain caught fire. I was writing this while watching the fire on the east end of the mountain from my front door. It was quite spectacular. The temperature was 90 and we had a 25 to 35 mph wind. There was little hope of containment. However, cooling weather on Tuesday allowed the firefighters to slow the spread significantly. Part of this fire burned in a mosaic, too, though the east end of the mountain was totally devastated by the fire.

While on Laramie Peak, we got a flat tire which did respond to fix a flat. The tire had a bad sidewall and I needed new tires on front, so I bought four used tires on 9/5. Saturday, 9/8, while heading to the ranch, we went across a cattle guard and hit a bur on it, instantly flattening the rear tire. After the inflator failed, we tried fix-a-flat. You know you are in trouble when the fix-a-flat just squirts out the hole in the tire. We dragged all the stuff we were hauling with us out of the back and installed the donut tire. We then repacked the car and began our slow journey home. Monday thereafter, I bought two new snow tires and put them on the front, keeping the remaining tire from my previous purchase for a spare. So much for the new tire idea....

We caught another swift fox in our critter trap. I don't know if a swift fox is big enough to take on my ducks, but I thought it's probably no safe for the fox being in the development. There are too many big dogs. So I took him out to an open field and let him go. September 15th we caught what looked like the same fox! Guess he didn't learn the first time!  We turned him loose again.

There are a large number of birds around our place. Wilson's warblers are migrating through. They are so tiny and cute. When I was weeding the garden, they would come in and sit a couple of row over and eat seed off the weeds. As long as I didn't move, they just ignored me. It was so cool! Sunday, there was a woodpecker in our poplar tree (I didn't get a picture due to camera failure). There are several species of sparrow and several meadowlarks here also. One meadowlark keeps ending up in the covered part of the duck pen. One time the ducks decided to attack the bird and I stopped them. This did not keep the meadowlark from coming back, however.
I also did not get a picture of the bittern that landed in our windbreak twice.  I have kept watching, but he has not returned.  We are a long ways from water, though I do have the tiny, ornamental pond.  Maybe in a drought, any water counts.

The deer are also here sometimes. They are changing to fall/winter color. Saturday, two fawns were in my front trees watching me pack my car! Many times they seem to not fear me at all. Or they like my trees and shade more than they fear me! 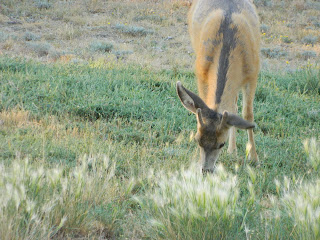 We flipped our old metal shed on its back and put a pallet floor in it. No photos—things were going to well to pause for pics! We also finished the other shed, so I have plenty of storage room now.

October 2: Gardening is over now. In a typical Wyoming weather pattern, today it's 80 degrees with a red flag warning (fire danger due to high temperatures and low humidity) and there is a freeze warning for tomorrow night. Gotta love the drastic change.

I did not get much from the garden. It was so hot, there was .4 inches of rain all summer and the weeds ran rampant no matter how hard I tried. I will take a summer of next year and try to kill the weeds before gardening again. We talked to weed and pest and they helped us with a plan to get rid of the weeds so we can return to gardening.

I have a few more things to do before the cold weather hits, so I must sign off for now.  I'm putting a bunch of photos in from here on. 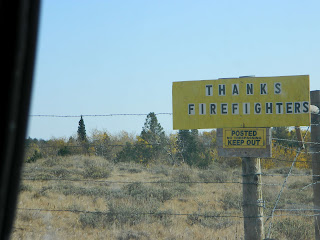