Dogs and other things

Spoke too soon on the dog problem.  Both dogs were clear up to my house this week.  Looks like it's time for a letter to Metro and fortifying the duck enclosure.  Maybe an electric fence and a game camera for documenting intruders.
﻿
﻿

3/30/2011
Looks like the dog problem has subsided, mostly because the dogs destroyed everything that was interesting and there's nothing to come back to. The problem is actually quite widespread. A letter to the editor last month said a pack of dogs was threatening school children and the sheriff's deputy was feeding the dogs his lunch in order for the kids to get to school safely. You cannot shoot dogs, even with a paintball gun (guess that would prove Metro is doing nothing about this). So the dogs threaten the kids with impunity. Guess that shows that how high dogs rank in Natrona county--the dogs have higher rights than children.

I am getting some ducklings in about 6 weeks. If the dogs come back, it seems likely I will be posting pictures of dead ducklings or the feathers that are left. It's really impossible to keep a 50 lb dog out of a duck pen. I am considering a surveillance camera (game camera) because if I can prove the dogs killed the ducks, Metro will destroy the dogs. The only way that can be avoided is with a very sturdy pen, with a top, and the dogs don't get another chance. Someone passed a law on "vicious dogs" which contained the rule that dogs killing anything outside their yard makes them vicious. It was supposed to stop pit bulls and rottweillers (Metro afraid of these dogs) but it actually does far more. I don't think people would have approved if they had known what was going on. Even Game and Fish is complaining about dogs killing wildlife. The dogs can be shot for this, but since dogs are gods here, it's an iffy thing to do.

Otherwise, things are normal for spring here. It's supposed to get to 65 on Saturday, then a high of 33 on Sunday. Love that springtime weather. Here's a picture of the dusting of snow we had on the 21st: 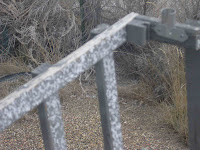